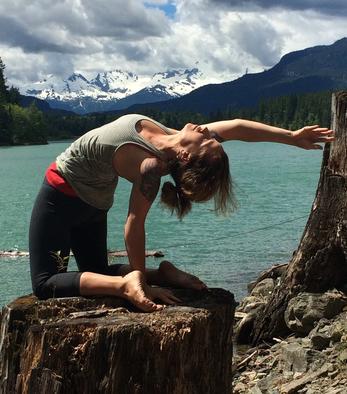 With a Bachelor's Degree in Cultural Anthropology, Jess has studied shamanism and human consciousness extensively.  She believes yoga to be the ultimate form of shamanism---the ability to heal oneself, and it is her goal to lead you to your own innate ability to heal through the meditative qualities of movement in yoga.  As ancient shamans would use singing and drumming to enter into ceremonious mindfulness, Jess uses her badass playlists to set the tone of each class.  Though she loves any opportunity to teach a power flow class, Jess has been especially drawn to the intense healing power of Yin yoga, which entails holding postures for 3-10 minutes in order to exercise the joints and slow the mind.  She recently completed a 60 hour Yin Yoga teacher training at the Sea-to-Sky Buddhist Retreat Centre in Squamish, B.C. with Yin guru Bernie Clark and has thoroughly enjoyed bringing her experience back to her students.

​​​​​Jessica first arrived on her yoga mat carrying a lot of baggage, literally and figuratively.  She was in the middle of her Master's Degree program, feeling overworked, overstressed, and incapable of finding time to take care of herself.  After several years of self-sabotage, anxiety, and depression had consumed her, she finally made a move to do something for herself and went to a yoga class.  Her body quivered in every pose and she was nowhere near touching her toes, but the emotional release she found as tears flowed from her eyes in Savasana was enough to keep her coming back.  From that moment on, Jess made a commitment to her practice and though it was incredibly challenging, each practice, each breath, each Savasana catapulted her to a much happier, freer, calmer, loving version of herself.  It was a natural progression that she eventually combined her two passions- teaching children and practicing yoga- by teaching Kid's Yoga classes, which led to her 200 hour Holistic Flow Yoga teacher training with Travis Eliot.