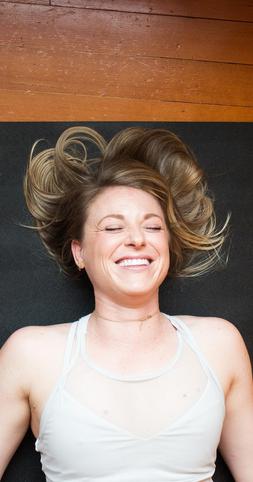 Leanna discovered yoga in 2010, after an invite to what turned out to be a three-hour, heated vinyasa flow. With her foot shaking in her hand, Leanna was overwhelmed with laughter and joy. There was no turning back. Coming from a background in dance, Leanna was exhilarated by the challenge of developing both athleticism and breath-body movement. She found that as the dance world became something of the past, yoga became something of the present. She was able to express her artistry through yoga. After two years as an eager student, she decided the next natural step was to pursue her teaching certificate. Leanna trained under Tiffany Yoga and is currently in the 500-RYT program with Yoga Medicine.

Leanna has found that her passion as a teacher lies in the integration of anatomical awareness and playful, mindful movement. She specializes in shoulder and hip disfunction as well as yoga for athletes and myofascial release. While her classes may require unique movement, you will find yourself feeling better in your body.