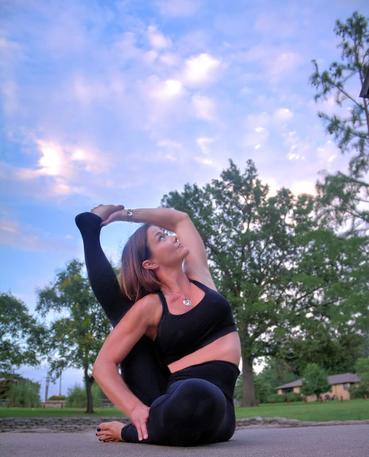 Melanie began practicing yoga at home in the winter of 1993, following along to a VHS in her Montana living room. Over the next several years she integrated yin into her routine of running and hiking. Melanie became reconnected to yoga in 2010 and immediately noticed how she felt a deeper calming sensation and experienced amazing physical benefits within her body. As she began to feel the transformation yoga had in her life she felt inspired to share the gift of yoga with others. In 2014, she began her 200 hour Holistic Yoga Flow Training with teachers Daniel Head and Travis Eliot. After meeting Elinore Cohen at a yoga filming, Melanie was inspired to begin the Pure Flow 300 hour Training. Combining the elements of power yoga with the alignment/refinement practice she has learned from her 300 hour program, Melanie teaches dynamic and inspiring alignment based power flow classes. She enjoys encouraging and motivating her students to develop a well rounded yoga practice on and off of their mats.  Melanie has an experienced background in Neonatal Intensive Care as a RRT for the past 20 years and is passionate in the areas of Mother/Baby Yoga as well as Prenatal and Postnatal Yoga. After much hard work, Melanie has completed her 300 Hour Pure Flow training in December 2016 and is now a 500 RYT. In July 2017 Melanie completed the Mama Tree Prenatal Yoga Teacher Training.